We’ve all had that haircut where we ask for two inches off, and leave with a shoulder length bob. We’ve all seen those zebra striped highlights that scared us away from ever trying to go lighter. It doesn’t have to be that way.

At Architeqt Salon we pride ourselves on having a team of enthusiastic, educated and still eager to learn stylists. We are keen on setting trends instead of following them and approach hair with an innovative and eclectic style that sets us apart. Our stylists are held to a standard: We create a color and cut that is cohesive while suiting each clients face shape, skin tone and personal style.

That being said, the integrity of hair is very important to us. A sexy platinum bob doesn’t have the same appeal if the ends look like they’ve been singed with a crimper. I would much rather a client leave with shiny, bouncy hair than replicate a recent favorite Pinterest picture with no regards to the health of their hair. Now you can have your blonde hair and it be healthy, too! No, seriously!

A revolutionary product for hair colorists, Olaplex, has immersed from the hands of the hair gods. Well, technically a group of awarded and reputable chemists, but they will now forever be deemed the hair gods by hair stylists eternally. They have created a product that heals, seals and multiplies the bonds in the hair. Without boring you, let me try to explain.  There are three types of bonds in the hair: hydrogen, salt and disulfide. Hydrogen bonds alone are broken from water and heat, salt bonds are broken from strong alkaline or acidic solutions (hair color) and disulfide bonds are the strongest and can be broken by hydroxide relaxers.

Olaplex is not a deep conditioning treatment or a bandaid for damage. It enables colorists to process clients longer and/or more often than we were able to without it. The hair is softer and stronger than it was before the color service.

Guy Tang and Tracey Cunningham, two celebrity hairstylists, have been flaunting Olaplex for almost a year. They’ve been stringing us along, mentioning here and posting pictures of it there, with no real inside scoop. I love testing new products, breaking the rules and figuring things out for myself. I couldn’t help myself but to ransack google and delve into every forum and social media post about it. There wasn’t much except that everyone was skeptical, including myself, but no one had used it. I immediately signed up for the VIP email list to be one of the first notified when it would launch.

I was more excited than Christmas morning in first grade when I got the email to buy. I had at least 10 clients in mind that I would have to call right away. If this was going to be everything it promised, no damage while lightening or color correcting, color as we know it is going to change big time.

Olaplex was delivered Thursday evening, and I danced around the entire salon. I had a color correction coming in the next morning to get Rihanna red hair. During her consultation she told me her hair was previously boxed colored dark. She tried to make it red herself, she had hot roots, so she boxed it again. I warned her that her hair was in bad condition and she was definitely going to have to lose at least 3 inches. She was ok with that, as long as it was red.

I love color corrections, and the satisfaction when it’s over and your client is smiling- but I had never been so excited about the end result. Her hair was incredibly shiny, full of life, and felt like silk- AFTER 7 COLOR PROCESSES!!!!!!!!! I LET HER LEAVE WITHOUT A CUT!! I’m still in awe.

Olaplex has two steps for the average client, and three if you’re very damaged. Step one gets mixed into the lightener or color, that is the bond multiplier. Step two is a sealer that gets put on after all color processes are finished and is left on for at least five minutes. Step three is an at home treatment that you use once a week. You leave step three on for at least 7 minutes and shampoo it out.

It should also be said that this does not mean clients can flip-flop back and forth between platinum hair, box color and back again. Olaplex is a tool, a power tool if you will, but not a cure for bad decisions. If it were, I would serve it in a glass on Sunday mornings. Just saying. 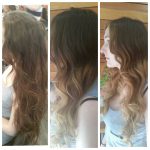 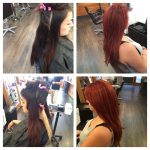 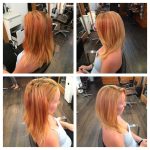 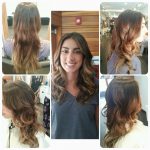